bigpigeon.us webpage Pott. Co. > A House Divided > Kirsten's Story > Kirsten's Niece, Christine Mortensen, updated by RAC 14 Feb 2020.
One of Kirsten Pedersen’s nieces, Christine Christensen/Anderson, lost her younger brother near St. Louis and then both parents along the Missouri River in 1855.  The family group had crossed the Atlantic to New Orleans, and then took a river boat to St. Louis and then a second boat up the Missouri River.

During the years 1856-1860, nearly 3,000 Latter Day Saints trudged from Iowa to Utah pushing handcarts.  Later one of the handcart pioneers, C. C. A. Christensen, depicted numerous scenes from the handcart crossings.

The journey was rarely as idyllic as in the following painting by C. C. A. Christensen, himself a handcart pioneer, might suggest. 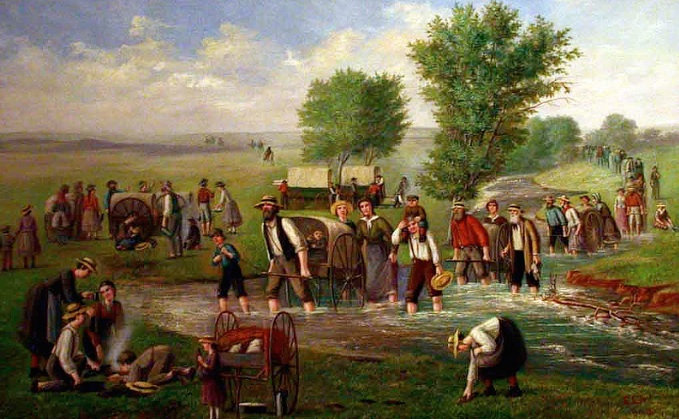 C. C. A. Christensen work, courtesy of flickr.com
In late 1856, Christine crossed to Utah on the Mormon Trail with the Willie handcart company.

Also in the Willie Company with Christine was the Mortensen family, consisting of parents and seven children.  Christine became friends with one of the sons, Anders Jorgen Mortensen.

Both the Willie Company and the Martin Company that followed were caught by winter in Wyoming.  Over 200 died in the worst disaster in the history of 19th century western migration.

Bodil Mortensen died of exposure one night in Wyoming and was laid to rest as best as possible, using as a shroud a sheet provided by Mrs. Mortensen.   Bodil Mortensen appears as a character in the LDS film 17 Miracles, a story of the Willie Company. 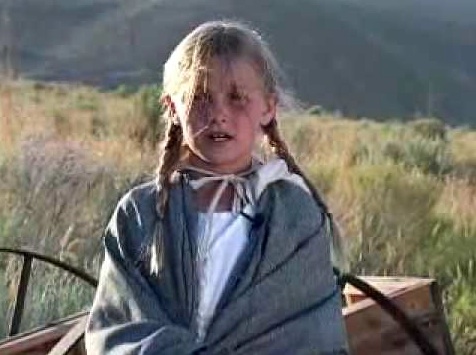 Savanna Kylie Lewis as Bodil Mortensen, courtesy of youtube
The entire Mortensen family survived the handcart journey to Salt Lake City, and then were provided with a wagon and sent to settle in Parowan in southwestern Utah.  Kirsten Pedersen’s niece, Christine Christensen/Anderson followed the Mortensen family to Parowan.  She and Anders Jorgen Mortensen soon married and began to raise a family.