bigpigeon.us webpage Pott. Co. > A House Divided > Kirsten's Story > Kirsten's Son, Anders Johnson, updated by RAC 14 Feb 2020.
Kirsten Pedersen's son, Anders Jensen, is thought to have come to Utah in 1869, which would disqualify him from the status of a Utah pioneer held by his mother and younger sisters.  (The transcontinental railroad was completed in 1869.)

​In Utah Anders used the surname Johnson.   Anders was married twice, with children from both marriages. 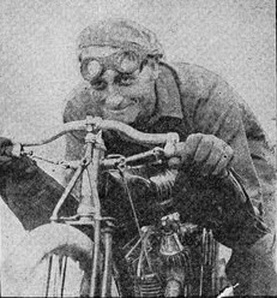 Anders' son, Odin Johnson, was a professional motorcycle racer.  Odin achieved brief national attention in 1913 when in a tragic accident he killed himself and six spectators during a performance in Ludlow, Kentucky.  Odin left behind a widow and an unborn child.